Graduate School of Science and Engineering
Electrical and Electronic Engineering

Laboratory for Electric Circuits and Systems

In our laboratory, we apply circuit and control theories to elucidate the “operation” of ever more complex circuit systems with a goal of creating “high-efficiency” systems.

Electric circuits are indispensable to modern life. In the course of ordinary life, however, we do not think much about where electric circuits are in use. Electric circuits are found in all sorts of everyday products, including cars, home appliances, computers and mobile phones, where they perform very important functions. In cars, for example, an amount of injection fuel is determined to run engine efficiently based on information such as the air mass flow and the throttle valve opening. Moreover, head lights, power windows, wipers, air conditioners and so on… which require electric circuits. The hybrid car is a recent development that uses fuel efficiently by combining inverters and motors. The importance of electric circuits is further increasing. At the Laboratory for Electric Circuits and Systems, we are conducting both computer simulations and experimental research that focus on developing operation analysis methods that investigate system behavior, treating the entirety of the electric circuits and their surrounding devices as a system, and control methods to make these systems function as desired. For example, we have following themes. 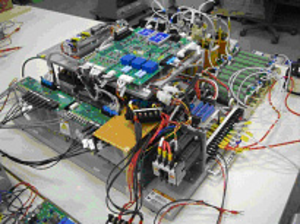 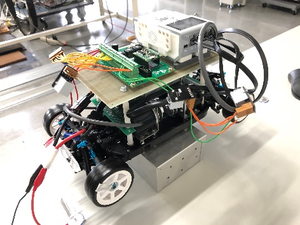 <1> Computer-aided circuit analysis and design methods
1. Optimizing Circuit Parameter Design
Optimal circuit parameters are computed for a given circuit design by determining the minimum of a selected index function. For this process, efficient computation of parameter sensitivity is under development using the direct method.
2. Parallel Processing of Circuit Analysis Methods
Fast circuit analysis algorithms which are suitable for parallel computing are under development. We are also researching algorithms for parallel processing using multi-core CPU to speed up analysis of ever more complex circuits.

<2> Operation analysis and control methods for power electronic circuits
1. Operation Mode Analysis of Power Converters
As converter circuits become more complex (adding clamp circuits, for example), it becomes necessary to use computer-aided numerical methods to analyze their operation modes. We are developing programs that automatically analyze operation modes.
2. Control of Inverters and Converters
Stable and fast converter control methods such as optimal control are being developed for efficient power conversion.

<4> Energy saving and stable drive methods for rotating electric machines
1. Energy Saving Drive Method for AC Motors
Energy for motor drive should be reduced. In this theme, energy-saving optimal motor speed and torque waveforms are investigated to satisfy given drive conditions based on analytical and numerical optimization methods.
2. Analysis and Control of Vibration in Motor Drive Systems
Various mechanical vibration appear in the motor drive systems. They cause electrical oscillation of motor currents and voltages. We analyze the problem and propose appropriate control methods based on simulation and experimental approaches.

<5> Stability control and energy analysis in vehicles
1. Wheel Slips and Stability Control for EVs
This research gives an analytical result of the rapid variation of slips between wheels and road surfaces, and proposes a novel Traction Control System (TCS) and Anti-lock Brake System (ABS) of EVs to suppress the rapid variation of slips.
2. Model-based Energy Consumption Analysis by using VHDL-AMS
Simulation of energy consumption in vehicles is an important issue to accelerate development. In this research, Very-High Speed IC. Hardware Description Language - Analog and Mixed (VHDL-AMS) is used for modelling and simulation.