There are various methods for recovering metallic ions from wastewater, including solvent extraction method extracting these ions in an organic solvent, and adsorption method using an ion exchange resin.
At this laboratory, we are working on the development of new technology for the separation and recovery of such materials, which uses extractant-impregnated microcapsules and allows a dramatic reduction in the volume of toxic organic solvents used. We are also working on the development of mesoporous silica that displays high levels of specific metal selectivity by imprinting metallic ions.

Efficient use and higher functionality of chitosan

Chitosan is a biomass polymer found in abundance in the natural world that reacts with metals to form stable compounds. Our research focuses on this property of chitosan, and aims to develop a method of separation and recovery of valuable metals from industrial effluent, etc., using chitosan as the adsorbent. One feature of this method is that metals can be efficiently recovered even from dilute metal aqueous solutions, and since the method does not require organic solvents, it is suited to a recycling society.

Chitosan contains highly-reactive amino groups, and so various function groups can easily be chemically modified. For example, the introduction of the functional groups shown in the diagrams below can yield a metal separation and recovery process that displays more superior selectivity.

Separation and purification of flora/fauna derived chitinase and functional development

Chitin is the main component in the outer shells of Crustacea such as prawns and crabs. Chitin oligosaccharide with a degree of polymerization of 5-7 is obtained through hydrolysis of chitin, and it displays various physiological properties such as antitumor activity and immunostimulating activity, and thus could be of use in pharmaceuticals, cosmetics and food manufacturing.

Recently, global environmental issues caused by exhaust fumes such as carbon dioxide (CO2), sulphur oxide (SOx) and nitrogen oxide (NOx) from the rapid combustion of fossil fuels are of major concern. One method of mitigating these global environmental issues is the absorption and fixation of exhaust fumes using microalgae that can grow in high concentrations of carbon dioxide. We are thus examining carbon dioxide and nitrogen oxide fixation using green algae (chlamydomonas reinhardtti), and the effect of different culture conditions on the production of useful dyes (β-carotene, phycobiliprotein) from blue algae (anabaena variabilis). In addition, microorganisms are receiving much attention as a method of recovering metals from industrial effluent. We are thus looking at growth inhibition when metals (Cu, Zn, Fe, etc.) are added to microalgae in culture, and at the behavior of metal removal.

The establishment of glucose active transport systems is likely to be of use in a wide variety of fields; not only in the glycoproteins and nucleoproteins used in medicine and physiology, but also in the recovery of useful components from wastewater. They could also be of use in the issue of how to dispose of bio products (microorganisms, water-soluble proteins, etc) that accompany the development of biotechnology.
Through the preparation of membranes which mainly consist of phenylboronic acid that displays high reactivity to diols, we aim to develop conditions for selective separation of glucose.
In phenylboronic acid, the ester condensation reaction is accelerated under particularly high pH conditions.

And, by impregnating this material within the membrane, we are aiming to produce a polymer membrane with glucose recognition capability. By inserting this membrane between the PMMA cells and changing various conditions, we aim to identify the status of glucose membrane permeation.
At this point, we have achieved effective glucose membrane permeation by forming stable complex between a quaternary ammonium salt cation and as an anionic phenylboronic acid-glucose. 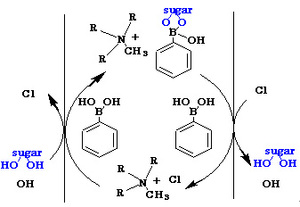 Utilizing the reversible reactivity of phenylboronic acid to pH, we used the membrane conditions to combine a series of reactions whereby glucose is captured on the high pH side and discharged on the low pH side. We are applying such system to active transport systems, which was previously very difficult.
In the future, we aim to develop this fundamental research to establish membrane systems that can be put to practical use.

Conventional versatile plastics derived from oil have become quite ubiquitous, but the greenhouse gases emitted on its disposal and the depletion of oil are now major issues. Thus, in recent years, biodegradable recycling plastics made from corn or cassava starch have received much attention. These plastics have little load on the environment since after disposal, they are broken down into water and carbon dioxide by microorganisms, which are then reabsorbed by plants by way of photosynthesis.
There are two main types of polylactate, one of the biodegradable plastics; those produced by microorganisms and those produced by chemical synthesis. Polylactic acid can only be created from optically active lactic acid, and L type polylactic acid is superior to D type in terms of transparency and the like, and so optically active lactic acid (L-lactic acid) is now produced by microorganism fermentation using plant materials, rather than the conventional chemical production methods. Lactic acid producing bacteria are used in this microorganism fermentation, but there are various issues with this; for instance, they are not resistant to extractants and other organic solvents, and they are highly auxotrophic.
For this reason, we are focusing on Bacillus bacteria which have low auxotrophy and are tolerant to organic solvents, and working on the design of a new lactic acid fermentation process using the toluene-tolerant B.thuringiensis G11 bacteria acquired on screening.

Adsorption and separation of bio products with wood based waste materials

Glucose is not only a structural component of organisms and a source of energy that supports life, but is also extremely an important material within organisms, it involves with the immune responses and the signal transmission between cells by linking with proteins, etc. The establishment of glucose separation systems would therefore be applied to various fields, including food and pharmaceuticals, and even recovery from wastewater and wastewater treatment. Demand for bio products, including amino acids and proteins, has risen remarkably in recent years along with the marked advances in biotechnology, and a new separation and recovery process for bio products is needed.
An optimum separation process for glucose or bio products would be low-cost and with no negative impact on the environment. To this end, we are researching the adsorption and separation of glucose and bio products using wood powder from bamboo and larch that have previously been treated as scrap wood.

Due to its high levels of reactivity, optically active epoxide is a notably useful chemical material in pharmaceutical sciences and synthetic organic chemistry as an intermediate reaction product. The most common synthesis method of optically active epoxide is direct epoxidation using heavy metal catalysts from alkene. However, this production method requires high temperature and high pressure. In addition, the environmental impact of heavy metals is a major concern. Thus, we are focusing our research on a new method of optically active epoxide production; optical resolution of racemic epoxide using the enantio selectivity of epoxide hydrolase by way of a microorganism producing enzyme.

Drug Delivery System (DDS) is the system in which the pharmacokinetics is optimized to maximize the efficiency of the drugs and to minimize the side effects. Recently, not only the organic synthesis of the drug molecules but also the material-based drug carriers have been used for DDS, and various drug carriers consisting of lipid-, polymer-, and inorganic-materials have been developed by biochemical engineers. In our research group, the novel materials for drug delivery systems are created for vaccine and transdermal delivery. In vaccine, antigens derived from pathogens are encapsulated in emulsion- and gel-based systems and production of antigen specific immunity is enhanced. In transdermal delivery, emulsions and ionic liquids are used to increase hydrophobicity of drugs and enhance skin permeation. Additionally, these strategy using biomaterials enables to make a novel tissue engineering application. Three dimensional materials consisting of cells are developed using gel-based scaffolds.